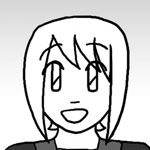 A double panel and a new character? Will wonders never cease? I was actually lucky enough to get the full double panel printed in the Badger Herald. They had space from being short a comic or two, or something. Or my editor just made room for it. The shortened version was just the lower half, but… END_OF_DOCUMENT_TOKEN_TO_BE_REPLACED

Hmm, did Kally wander off-panel to make room for all the text, because I wouldn’t have to draw her again, or both? >_>

That’s the problem with large, sprawling campuses; there’s a lot of walking. Which isn’t too bad in the warmer (or mildly cool) months, but the winter? Fuggedaboutit..

That was the convenient thing about engineering; eventually all your classes were concentrated into one or two buildings, all of which were near the same location. I suppose that most majors would have this quality once you get into the higher level classes though.

My professor for my this particular class definitely told this joke. He had quite a few bad ones lined up from lectures that I definitely put into comic form. He was a good guy, that professor. Not that I remember what class it was. >_> Had something to do with magnetic fields, though. Here’s the… END_OF_DOCUMENT_TOKEN_TO_BE_REPLACED

The same professor from yesterday’s comic said this joke as well.

This is another line from a professor, but not the professor from yesterday’s comic or the day before’s. This was, most likely, my least favorite professor, most likely because I got my worst grade in college from his course (a C. I know. Very traumatizing). He started his class by saying that he didn’t care… END_OF_DOCUMENT_TOKEN_TO_BE_REPLACED

When Sasha says “our last roommate” it means “the one you haven’t met yet” rather than “former”. Re-reading it now it seems a bit unclear. Either way maybe they should’ve told Abby about him before now.

And here the ‘mystery man’ refers to the roommate, not just some random guy of the streets. Hm yes, looking at your script writing from years ago certainly builds up the confidence. XD