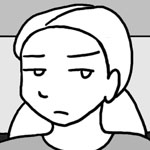 Last time we met Sasha; now we meet Kally, the other main character in Random Doodles. (So far).

This, technically, is the first Random Doodles comic.Way back in my first semester at UW-Madison (in 2004 — let me take a minute to feel old here…), I sketched a silly little comic in my CS302 class. A nearby friend said it looked good and that I should totally draw comics for one of the… END_OF_DOCUMENT_TOKEN_TO_BE_REPLACED

Back when I had my comics published in The Daily Cardinal, a friend of mine from high school had been drawing a comic in the same paper. I had suggested we do a comic where his comic prank calls my comic. Unfortunately, due the Cardinal’s ‘random schedule for not regular comics’ mine was never published.… END_OF_DOCUMENT_TOKEN_TO_BE_REPLACED

I think this was the first comic I got a random compliment for by an acquaintance. I guess quoting movies will do that for ya.

That’s an actual quote from a professor, by the way. Fun story: Back in high school, one of my history teachers would talk about the cold war and would actually refer to Russians as ‘Red Commie B*******’ in class, mostly in jest. Her defense — people actually called them that during the time period, so… END_OF_DOCUMENT_TOKEN_TO_BE_REPLACED

This actually happened in our class too. The Astronomy Dept. and the Physics Dept. shared a building; there was rumored animosity between the two.