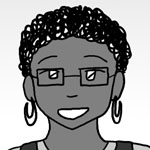 Dolores makes her triumphant return! And I now totally agree with her suggestions. Too late now, though.

Dolores and Sasha are now smashing that fourth wall to bits. Well done.

Dolores and Sasha have now completely broken the fourth wall and are attempting to drag Kally through. Maybe she’ll get it before the new year? :)

Happy New Year! And with a new year comes an existential crisis! Or not. We’ll see how our wall-breakers handle this one.

Whoops. Looks like our wall breakers moved on to breaking other things. Or people, as the case may be.

They won’t let up, will they. Though really, this whole storyline is kinda weird. And it just keeps going too, because if I’m good at one thing it’s milking plotlines for all the jokes they could possibly contain, no matter how not-really-funny they might be.

At least the Valentine’s Day comic is during the winter, right?

And Dolores swings them back into real time, thus ending their time being stuck. Good work, Dolores! Mighty convenient of you to end the story arch like that shortly after my editor told me to! XD

100 comics — whoo! And no, I was never against doing shameless ‘yey X number of comics made’ comics. Gotta pad those numbers somehow. XD