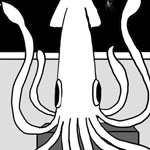 The Squid doesn’t really have a proper name besides ‘The Squid’. Or at least not one that he’s told to anyone.

And so enters The Squid.

Went and got his friend, more like. The idea for flying squids came about due to a class my husband-to-be was taking online at the time. They had to write a paper explaining possible evolutions squid might make if they were dumped on some planet and left alone for billions of years. I suggested flying… END_OF_DOCUMENT_TOKEN_TO_BE_REPLACED

Spoiler Alert: The squid stays around.

I am fairly certain the squid never glows in the dark again. Well, at least not on panel. (Note to self: Make references to the squid glowing again.)

100 comics — whoo! And no, I was never against doing shameless ‘yey X number of comics made’ comics. Gotta pad those numbers somehow. XD

As they say, curiosity killed the cat…

Look at that, the storyline ended just in time for Halloween! Well, at the time of publishing. Good timing, past me. And Happy Panda Day, Everybody!